How and Why the Declaration “From Jerusalem to Rome” Came About 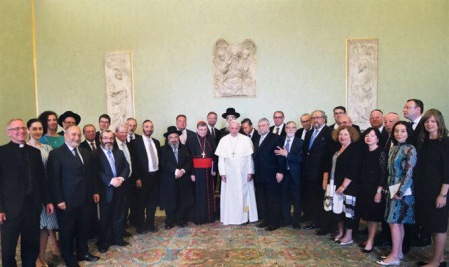 On August 31st 2017, Rabbis representing the Rabbinical Council of America, the Chief Rabbinate of Israel and the Conference of European Rabbis presented a declaration to Pope Francis, entitled From Jerusalem to Rome, Reflections of 50 Years of Nostra Aetate. That declaration includes a somewhat lengthy theological and historical introduction. To someone not steeped in the fine points of Jewish Christian dialogue, be he Jew or gentile, the finer theological points made in the introduction may be a little mystifying. Here is a short paper about our declaration — How and Why the Declaration From Jerusalem to Rome Came About.

Interfaith declarations are not easy for Judaism. First of all, having a very highly developed religious law ─ Halacha ─ which it is bound to and cannot change by fiat, all declarations that purport to be expressions of traditional, Orthodox Judaism need to stay clear of ideas proscribed either by Jewish law or philosophy.

Moreover, as the most ancient of monotheistic faiths, it cannot simply incorporate new theologies, especially not such ideas that were the cause for the schisms that prompted the establishment of later faith communities. The particular way in which Christianity claims compatibility and continuity between what it calls the Old and New Testaments simply does not work for Judaism’s relationship to the Hebrew Bible, which is quite distinct from how a Catholic, for example, relates to the same text. Likewise, the manner in which Muslims interpret biblical prophets to make them fit Islamic theology may work for a Muslim, but not for a Jew, who sees those self same people differently, through the lens of his own religious tradition.

Furthermore, it cannot be denied that throughout its history, the Jewish People has repeatedly experienced forced conversions, been the target of intensive missionizing by majority faiths, and subject to persecution and exclusion on behalf of its otherness, in majority societies’ desire to stamp out Judaism and its unique message. The tenacity with which Jews held on to their ancestral faith in the face of the threats of even torture and death testifies to the profound importance Jews and Judaism have always ascribed to loyalty to Jewish principles.

Finally, as a minority religion, a small minority religion, Judaism cannot rely on sheer demographic power to maintain fealty to its core doctrines while opening up too much to the earth-flattening societal influence of majority religions with hundreds of times as many adherents. Opening too much or too fast will expose it to unwanted and unwarranted pressures to adapt doctrines so as to please newly open majority society.

The import of the above vectors was explored and then succinctly summarized by Rabbi Joseph Ber Soloveitchik in his pioneering essay Confrontation.1 They may be illustrated by the following choice quotes:

First, we must state, in unequivocal terms, the following. We are a totally independent faith community. … As a faith individuality, the community of the few is endowed with intrinsic worth which must be viewed against its own historical backdrop without relating to the framework of another faith community. … The small community has as much right to profess its faith in the ultimate certitude concerning the doctrinal worth of its world formula and to behold its own eschatological vision as does the community of the many. …

Second, the logos, the word, in which the multifarious religious experience is expressed does not lend itself to standardization or universalization. … Hence it is important that the religious or theological logos should not be employed as the medium of communication between two faith communities whose mode of expression are as unique as their apocalyptic vision. The confrontation should not occur at a theological, but at a mundane level. …

Third, we members of the community of the few should always act with tact and understanding and refrain from suggesting to the community of the many, which is both proud and prudent, changes in its ritual or emendations of its texts. … Non-interference with and non-involvement in something which is totally alien to us is a conditio sine qua non for the furtherance of good-will and mutual respect. …

Fourth, we certainly have not been authorized by our history, sanctified by the martyrdom of millions, to even hint to another faith community that we are mentally ready to revise historical attitudes, to trade favors pertaining to fundamental matters of faith, and to reconcile “some” differences.

Subsequent to the publication of Rabbi Soloveitchik’s essay, in 1964, the Rabbinical Council of America adopted a resolution that incorporated a number of phrases of Rabbi Soloveitchik and contained veiled references to other phrases. Unlike some other Orthodox rabbinic groups, the RCA did open up to interfaith work with the Catholic Church, but hews to this very day to the principles laid out by its illustrious gray eminence. Many Orthodox rabbis from outside the USA similarly adopted these guidelines.

However, whereas in Confrontation, one still senses a tremendous uneasiness, a concern that interfaith cooperation may work to erase the distinctiveness of the “community of the few” and attempt even subconsciously, by peaceful means, that which the violent means of past generations did not achieve, nowadays, with over 50 years of hindsight, we may confidently state that the process set into motion with the Second Vatican Council and the publication of Nostra Aetate No. 4 has demonstrated a genuine desire to repair the sins of historical anti-Judaism, and increasingly to distance itself from missionizing or otherwise undermine the distinctiveness of the “community of the few.”

Thus, close to fifty years after the publication of Nostra Aetate, the Standing Committee of the Conference of European Rabbis, as it met in Athens in November 2015 for its semianual meeting, explored, debated and finally decided that we ought to recognize, not as individuals, but as religious representatives of the traditional, Orthodox Jewish Community, the significance and success of Nostra Aetate No. 4. Furthermore, it was immediately decided to reach out to the religious representatives of traditional, Orthodox Judaism in Israel and in North America, so that our response be more representative and more impactful.

A Committee was formed from among the members of the CER’s Standing Committee, and both the Chief Rabbinate of Israel and the Rabbinical Council of America were asked to each form their own committees or appoint their own representatives to draft and comment on our joint response.

The following individuals represented the three organizations that are signatories to this document in the committees that authored the document2:

Our response is directed towards the Catholic Church, but it could not be drafted without being solidly anchored in our own Judaism, in our Jewish theology and in our understanding of our role in history and in the contemporary world. What does it mean to be both a Jew, member of the parochial, distinct Jewish community, and a human being, member of the universal human race? How do we mediate between our concerns as Jews and as people? We turned to our holy Torah for inspiration and understanding, as can be seen from the preamble to our declaration.

2We are also grateful to the following individuals (listed alphabetically), who saw and commented upon early drafts of our declaration:

This entry was posted on Monday, September 4th, 2017 at 10:52 am and is filed under English, Essay, news. You can follow any responses to this entry through the RSS 2.0 feed. You can leave a response, or trackback from your own site.